Ohio Gov. Mike DeWine and state legislators agreed to raise the state’s gas tax in order to generate additional revenue for infrastructure improvement, which will lead to more work for members of the building trades. 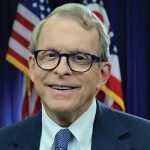 During his monthly appearance on America’s Work Force Radio, Dorsey Hager, Executive Secretary-Treasurer of the Columbus/Central Ohio Building and Construction Trades Council said while he does not like paying more at the pump, the increase is needed to fix crumbling roads and bridges.

Hager added H.B. 62 will create an estimated $865 million a year in new tax revenue and will create tens-of-thousands of Prevailing Wage construction jobs.

The legislation will go into effect on July 1, as gasoline will increase by 10.5 cents a gallon and the tax on diesel fuel will go up 19 cents. The state’s current gas and diesel tax is 29 cents a gallon. According to the bill, about 55 percent of the additional revenue created will go to the state and the reaming 45 percent will be given to local governments specifically for infrastructure projects.

Besides the gas tax, the bill requires owners of electric and plug-in hybrid cars to pay yearly fees. There will be a $200 tax each year on electric vehicles and a $100 yearly tax for  plug-in hybrid vehicles.

Hybrid and electric vehicles have contributed to the decline in gas tax revenue, as owners use little to no gas, yet still contribute to the wear and tear of Ohio roads and bridges. In general, more fuel-efficient cars and trucks have also led to a decrease in revenue from the gas tax, which was last raised
14 years ago.

Additional language within the bill contains a formula to convert compressed-natural gas to gallons, and owners of CNG cars will have to pay a tax on this fuel, which will be phased-in over the next five years.