In the midst of a Community Benefits Agreement to construction Fire Station No. 35, the City of Columbus signed another agreement to ensure only highly trained and highly skilled members of the Columbus/Central Ohio Building Trades will construct the new Linden Park Community Center and rehabilitate Linden Park.

The $25 million project is expected to create between 60 and 80 jobs for affiliated members of the C/COBCTC. 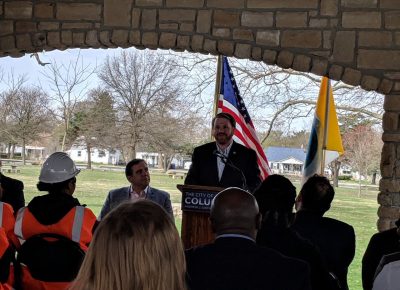 This third Community Benefits Agreement guarantees the hiring of a local workforce of Columbus residents to make up 30 percent of tradesmen and tradeswomen working on the project. Additionally, the Columbus/Central Ohio Building Trades will work with their affiliated unions and contractors to ensure contractors make good-faith efforts to hire qualified workers from within the Linden area.

“This Community Benefits Agreement represents an enormous opportunity for both the Building Trades and the city,” said Executive Secretary-Treasurer of the Columbus/Central Ohio Building and Construction Trades Council Dorsey Hager. “This partnership provides the city with highly trained, local, skilled journeymen and women who will complete this project on time and on budget while creating career opportunities in the building trades.”

During Ginther’s first term in office, the mayor has demonstrated an understanding of the building trades and how they can offer men and women, regardless of race, the opportunity to live a middle-class life.

“This agreement continues to build on my commitment to expanding Columbus’ success to every person in every neighborhood,” said Columbus Mayor Andrew Ginther. “I applaud our local labor unions for standing with me and the community in this effort.”

By signing a second Community Benefits Agreement, the city and building trades continue to strengthen a growing relationship.

According to the agreement the C/COBCTC has agreed to hold three recruitment events in the Linden neighborhood and the City of Columbus will continue its investment in building trades by providing funds for toolboxes, hard hats, boots and other materials for more than 300 middle school and high school students in Columbus City Schools training programs.

It also builds upon the work of the Community and Workforce Committee, which was created by the first Community Benefits Agreement, and is made-up of representatives from the C/COBCTC, the City of Columbus and organizations dedicated to the advancement of minorities, women and low-income residents.

“We believe the Community Benefits Agreement for the Linden Community Center project is continued progress step in cultivating a culture of greater inclusion of African-Americans in the building trades,” said Nana Watson, President, Columbus Branch of the NAACP. “We congratulate the City of Columbus for responding to the need to construct a second such agreement.”

Work will begin in June and is expected to be wrapped up by September 2020.

Enhancements to the park include a spray ground, teaching kitchen, gymnastics room, walking paths and a new, larger parking lot.