The Columbus/Central Ohio Building and Construction Trades Council announced Tuesday, the endorsement of Andrew J. Ginther for a second term as Mayor of Columbus.

The city has prospered thanks to Ginther’s leadership during his first term as mayor. The Democrat has also been endorsed by the Franklin County Democratic Party and the Stonewall Democrats of Central Ohio. 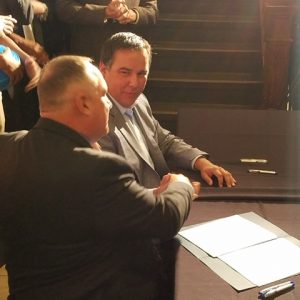 “I am honored to have the support and endorsement of the Columbus/Central Ohio Building Trades,” said Ginther. “I’m proud to have worked with the trades on a historic Community Benefits Agreement – the first in the City of Columbus – and am looking forward to future Community Benefit Agreements.”

During Ginther’s first term, the city signed three Community Benefit Agreements – one to build Fire Station No. 35, one to convert MAPFRE Stadium into a community sports complex and another to construct the new Linden Park Community Center and rehabilitate Linden Park.

The Community Benefit Agreements guarantee these projects will be completed safely, on-time and on or under budget, while continuing to diversify the building trades with an emphasis on local and minority participation.

“These agreements provide good-paying jobs with benefits in the trades, increase diversity in the trades and help connect residents and community members to apprenticeship programs that lead to economic security and an honorable profession and career,” Ginther continued.

Ginther believes the city has a responsibility to invest in the people, families and neighborhoods of Columbus that have not always shared in the city’s success.

“By most measures our City is a beacon of diversity, inclusion and opportunity,to  but that is not true for everyone,” he said. “I believe that where you live shouldn’t limit your opportunities. The belief has guided my first term in office, and would continue to guide a second term, should I be re-elected.”

“His commitment to using Community Benefit Agreements on city projects helps promote programs he believes in – pre-apprenticeship and apprenticeship programs,” said Hager. “These programs provide residents of Columbus with the opportunity to get on the direct path to the middle class.

“Under his leadership, Columbus has become the 13th largest city in the country and continues to be a great place to work, live and raise a family,” Hager added.