Held at the Sheet Metal Workers Training Center, the goal of the Signing Day was to encourage people to join the union construction industry. 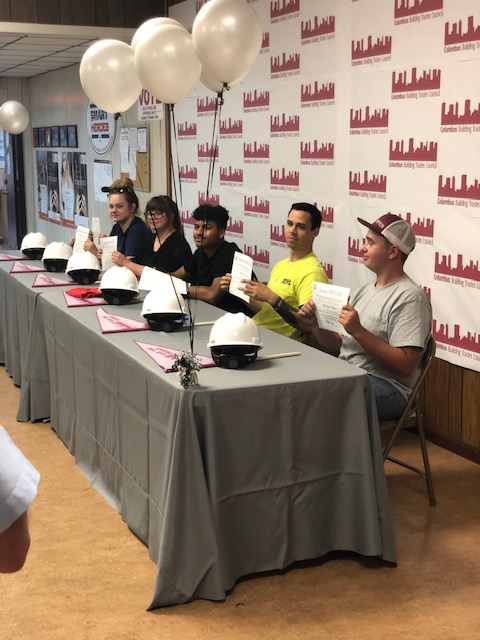 Five of 31 men and women announced the trade they intended to join as an apprentice as part of the Signing Day event.

During the event, 31 men and women, including a majority of recent high school graduates and several veterans who recently transitioned out of the armed forces, announced the trade they intended to join as an apprentice.

“The event was important to celebrate the men and women entering the sheet metal, electrical and plumbing and pipefitting trades,” said Columbus/Central Ohio Building and Construction Trades Council Executive Secretary Dorsey Hager. “All will be starting off earning a good middle class income with benefits and earning college credit for free.”

With the current building boom going on in central Ohio, contractors such as Turner are struggling to fill all positions.

Turner Assistant Manager of Media Relations Drew Schaar told the Columbus Dispatch he hopes this recruitment tool will help bring more men and women, regardless of race, into the building trades.

Currently, most of the 18 area building trades unions are in need of apprentices to learn a particular craft. Due in part to the large building boom and the retirement of the Baby Boomer generation, construction workers are in high demand.

“We want to publicly acknowledge all of the people coming into this trade and cast a spotlight on what is needed and create a movement,” Vanessa Jester, Workforce Development Manager at Turner Construction said to the Dispatch. “We have a lot going on in Ohio in the industry, and getting the word out is good, to continue the building we have been doing.”

Hager believes events like this help raise awareness about the need for men and women to enter into the union construction workforce and also show there are alternatives to college, where people can avoid student debt and want to make a good living.

As the need to attract more talent to the industry increases, events such as Signing Day may play even a bigger role.