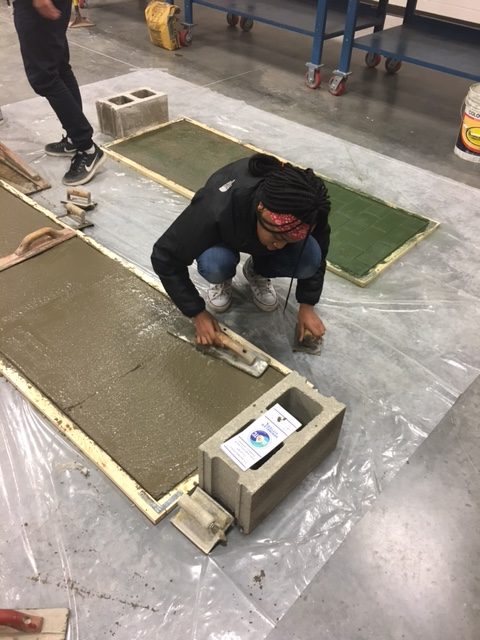 Hundreds of people attended a construction career fair in Columbus where numerous hands-on demonstrations sparked conversations about the rewarding possibilities the construction trades can provide.

Students, parents and representatives from Columbus City Council, the Columbus School Board and the Ohio Statehouse packed the Construction Arts Facility at the Fort Hayes Metropolitan Education Center on Jan. 26 to learn about potential work in the construction industry.

The career fair was an opportunity for unions affiliated with the area’s Building Trades to reach out and speak directly to potential apprentice candidates and the people who can influence their decisions.

“I believe it was a great success,” said Rob Gartner, Training Coordinator for Sheet Metal Workers Local 24 Columbus District JATC. “We had a diverse group of people that were there because they want to work and want to better themselves.”

Some of the union trades represented at the event offered a hands-on demonstration of the work they do in order to help give attendees an idea of what a day on the jobsite can entail.

Gartner, who also helped coordinate the event, called the hands-on demonstrations the key to the event’s success because it gave journeymen a chance to have a real conversation with attendees.

“This setting gave us a chance for conversations, not just the typical job fair run through,” he said.

Besides getting the opportunity to perform tasks of various trades, attendees also learned about the construction industry’s growing need for workers and were introduced to the apprenticeship model.

“There is an incredible need for apprentices,” said Dorsey Hager, Executive Secretary-Treasurer of the Columbus/Central Ohio Building and Construction Trades Council. “We are getting squeezed from both ends – the Baby Boomers are retiring and the economy is improving, so we need people to replace the people who are retiring and we need people to meet the growing demands of the construction industry.”

Journeymen from the various trades explained their apprenticeship model to students and parents, telling them how apprentices earn while they learn, receive excellent benefits and avoid costly college debt.

Gartner felt the overall idea of the apprenticeship model was appealing to many parents and students.

“I believe the parents and students were surprised at the opportunities in apprenticeship; not only that they can earn while they learn, but also that they can earn the benefits like pension, healthcare and college credits,” said Gartner. “People seemed very interested in the apprenticeship model and wanted to know more about the mentoring from journeyperson to apprentice that fosters the on the job learning.”

With a growing need for apprentices, Hager said the area trades decided to put on the career fair to expound upon their outreach to Columbus City School students.

“There is a lot of work in Columbus and Franklin County and our residents and graduates should be doing that work,” said Hager. “Mayor Andrew J. Ginther and Columbus City School Superintendent Dan Good were also very encouraging and worked hard to get the word out.”

For Gartner, this was a chance to directly talk to students who have not made up their minds about their future.

“It is critical that we reach out to students in high school or even younger to explain skilled trades so they can know the possibilities and opportunities that are available. We need to recruit and train a diverse workforce that will build our hospitals, schools and buildings of the future,” Gartner said.

“In the past, the skilled trades were passed down from generation to generation and many people did not know how to get into an apprenticeship. Career fairs like this are a great way to open the pathway for anyone that may have an interest. Anyone can go to our website and find out about our program, but this career fair gave me a chance to tell people our story and why they could be a good fit,” he said.