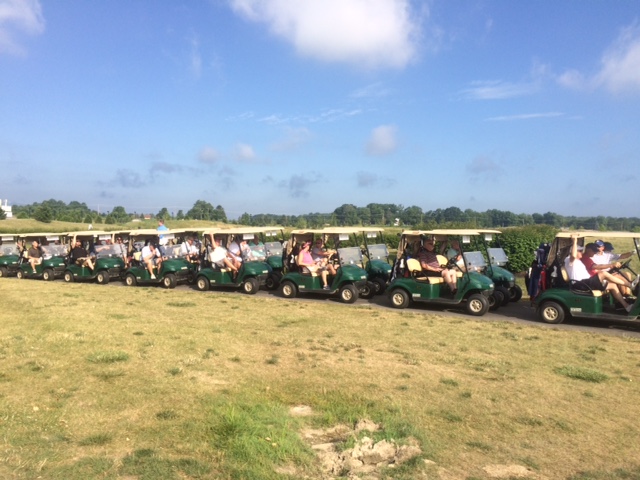 On July 13, more than a hundred golfers from across the state joined forces with the Ohio State Building and Construction Trades Council to raise thousands of dollars for diabetes research.

For the first time in its history, the annual OSBCTC event was used to raise money for a charitable cause.

The idea to turn the outing into a fundraiser came from Dennis Duffy, OSBCTC Executive Secretary, who heard other building trade councils were raising money for charity and thought the scramble was a great way to raise funds to help cure diabetes.

The outing, held at NorthStar Golf Club, began with a shotgun start at 9 am. and included door prizes, a raffle and banquet once the round was finished.

120 golfers participated in the scramble and raised $45,935 for Dollars against Diabetes Day (D.a.D.’s Day), which is an annual campaign organized by the Building and Construction Trades Department, AFL-CIO to fund diabetes research. All the money raised went to D.a.D.’s Day.

“I was really happy with the outcome. It was our first endeavor to assist D.a.D.’s Day and we exceeded expectations,” said Duffy.

“I want to thank all the golfers, the executive board and sponsors. Tim Hyland was extremely helpful in bringing sponsors aboard,” he said.

Over the years, with the help of State and Local Councils around the country, the D.a.d.’s Day campaign has donated more than $40 million to the Diabetes Research Institute, located at the University of Miami.

The Diabetes Research Institute’s mission is to cure diabetes now. They have received approval from the Food and Drug Administration (FDA) to proceed with a Phase I/II clinical trial for a process they believe can eventually lead to a cure for diabetes.

In just its first year raising funds, the OSBCTC raised the third highest total ever for a single D.a.D.’s Day event.