Penn National Gaming hit the jackpot by having their Hollywood Casino Columbus built under a Project Labor Agreement (PLA) by the Columbus/Central Ohio Building and Construction Trades.

By signing a PLA with the region’s building trades, Penn National knew the casino would be built on time and on budget, without any labor stoppages. 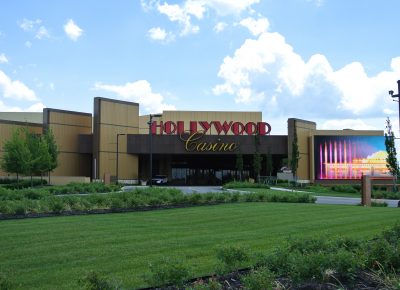 Not only did the trades keep their word, they exceeded expectation and finished construction ahead of schedule and under budget.

The region’s most highly-skilled and highly-trained construction workforce turned what was once a 44-acre brownfield site that formerly housed a Delphi Automotive Plant into Ohio’s largest casino.

Building trade members worked on an accelerated schedule to meet and exceed the demand to open the facility in early October 2012.

In addition to constructing the casino, the CCOBCTC also hosted job fairs to assist in local hiring and recruitment initiatives.

The project owner was extremely pleased with the work on by trade members.

“I would be remiss if I failed to acknowledge the terrific construction team from Rudolph Libbe and its many subcontractors. You delivered this project on time, and you met your promises, allowing us to meet and even exceed our ambitious goals for participation by unions, by minority- and women-owned businesses, and by local companies,” said Peter Carlino, Chairman and CEO of Penn National Gaming.

This project is an excellent example why project owners should use PLAs on any size project.

To learn more about the program or to apply in person, contact Leland Bass, Columbus Urban League Program Manager at 614-323-5496.