Regional building trades leaders and representatives from Local Unions and District Councils from around Ohio gathered at the Hollywood Casino in Columbus on May 8 to hear multiple speakers address the why and how Ohioans, including construction workers, are falling victim to opioid addiction.

Hosted by the Ohio State Building and Construction Trades Council, the event provided startling statistics on a national problem where Ohio is one of the states hardest hit by the opioid epidemic. 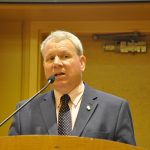 Ohio State Building and Construction Trades Council Secretary-Treasurer Mike Knisley said the state’s building trades do a great job testing members for drug use, but the summit is about more than getting union construction workers to the jobsite drug-free, it is to help the entire community.

The summit’s opening speaker, Columbus TV news anchor Colleen Marshall (TV- WCMH), told the crowd she grew up with a father who did not even know he was an addict.

Her dad was an electrician, who suffered life-threatening injuries on a jobsite. While in a coma, he was administered morphine and then became addicted to it. After coming out of the coma, he began to suffer from withdrawal symptoms.

Doctors told Marshall’s father he could never have morphine again because he would likely relapse.

Throughout the summit, speakers, which included representatives from Aetna, doctors, law enforcement and others, made it clear opioid addiction can happen to people of any age, in any occupation, from any economic situation and any walk of life.

“Construction workers give up a part of their body every day on the jobsite,” said Mark Douglas OSBCTC President. “In our industry, like a lot of industries, it is pay to play. You have to show up every day to get paid. Some of our members have to figure out a way to get through the workday, managing pain. Their job puts them in a position they do not want to be in. Take this information and give it back to your members to help them make an informed decision.” 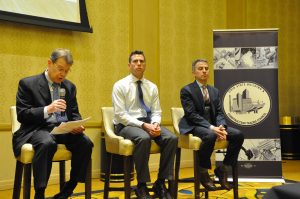 During the OSBCTC Opioid Summit, Michael Betz, Assistant Professor of the Department of Human Sciences at The Ohio State University (center) and Dr. Ali Mchaourab, Chief of Pain Medicine Service at the Louis Stokes Cleveland Veteran Affairs Medical Center, spoke as part of a panel discussion.

Michael Betz, Assistant Professor of the Department of Human Sciences at The Ohio State University, presented data showing how construction workers fall into a number of high-risk opioid- user categories.

According to his research, the epidemic disproportionately effects white males, who have a high school diploma, GED or less education. Unfortunately, many building trades members in Ohio fall into at least one of these risk categories.

Knisley concluded the summit by urging those in attendance to help lobby their elected officials devote more time and resources to address this issue. He also said trades members who need help with an opioid addiction should speak with their union leaders, who can direct them to an Employee Assistance Plan or another form of help.