The 71st Ohio State Building and Construction Trades Council Convention was recently held in Columbus, bringing together building trades delegates from across the state.

Roughly 174 delegates were in attendance to conduct business on Sept. 20 and 21, which was delayed a year due to COVID-19 safety precautions.

Members unanimously voted Mike Knisley to remain in his current role as Ohio State Building and Construction Trades Council Executive Secretary-Treasurer. OSBCTC President Mark Douglas received unanimous support as well and will retain his leadership role. Additionally, the entire 28-member Executive Board maintained their seats, as none of the leaders faced opposition.

In 2018, both Knisley and Douglas were first appointed to their current roles by the OSBCTC Executive Board upon the retirement of then Secretary-Treasurer Dennis Duffy. This will mark the first full-term for both officers.

Throughout the two-day event, delegates heard about the work affiliated members performed over the past five years and how it was essential to Ohio’s economy.

According to Knisley, in the five years since the last convention, the state’s roughly 100,000 tradesmen and tradeswomen worked a combined 262 million hours.

“Think about all the income created and the economic engine of our industry,” he said. “It shows union construction is a vital part of the state’s economy.”

The convention included speeches from a number of political and industry leaders, who spoke on a variety of topics. 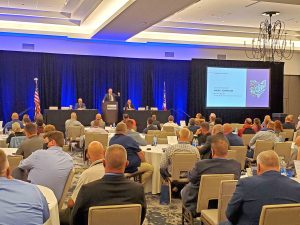 On the second day, North America’s Building Trades Unions Secretary-Treasurer Brent Booker compared the fate of unions during the last five years in Ohio to neighboring states. Ohio’s union construction industry has grown and prospered since the last OSBCTC Convention, largely due to no negative labor legislation being passed, unlike actions in some surrounding states, Booker explained.

Booker credited industry leaders for diligently working to educate and work with Republicans. Ohio stands as a model for the nation because the union construction industry has managed to prosper despite a Republican majority in both legislative houses and all statewide offices, he said.

The first resolution, which overwhelmingly passed, will increase the per capita contributions to fund the operation of the OSBCTC in two phases over the next two years.

A second resolution pertaining to delegate voting was not approved.