One of the largest semiconductor plants in the world will be built in Central Ohio by members of the union building trades. 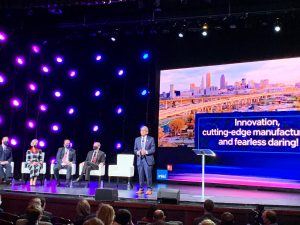 Ohio Gov. Mike DeWine speaks during the joint announcement between Intel and the State of Ohio regarding the semiconductor manufacturer building two new plants in central Ohio.

The project will create about 7,000 construction jobs, 3,000 full-time jobs and support tens of thousands of additional local long-term jobs across a broad ecosystem of suppliers and partners.

As Gelsinger put it, the state is already home to Facebook, Amazon and Google datacenters. Adding Intel to the mix will make Ohio the “Silicon Heartland.”

Once online, Intel’s Ohio facility will help boost production to meet the surging demand for advanced semiconductors, often called chips, in the U.S. and throughout the world.

The first phase of the project calls for Intel to make a $20 billion investment to build two plants, called fabs, on 1,776 acres in Licking County.

There could be three more phases added to the project to create six additional fabs, bringing the total investment to $100 billion over a decade. The remaining phases would sit on an additional 1,414 acres.

Eventually, New Albany will annex a total of 3,190 acres from Jersey Township for the project.

Planning for the first two factories will start immediately, with construction expected to begin late in 2022. Production is expected to come online in 2025, when the fab will deliver chips using the industry’s most advanced transistor technologies.

Ohio will be home to Intel’s first new manufacturing site in 40 years.

“Intel is bringing leading capability and capacity back to the United States to strengthen the global semiconductor industry,” said Gelsinger. “These factories will create a new epicenter for advanced chipmaking in the U.S. that will bolster Intel’s domestic lab-to-fab pipeline and strengthen Ohio’s leadership in research and high tech.”

“For the next 10 years, there will be good paying union jobs building this site,” said U.S. Sen. Sherrod Brown (D-OH).

“We’re excited the building trades will have the opportunity to build the largest microchip plant in the world,” said Dorsey Hager, Executive Secretary-Treasurer of the Columbus Building and Construction Trades Council. “Our history proves the skill and resiliency of our workforce will make this project a success.” 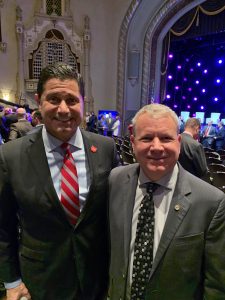 “A semiconductor factory is not like other factories,” he said. “Building this semiconductor mega-site is akin to building a small city, which brings forth a vibrant community of supporting services and suppliers. Ohio is an ideal location for Intel’s U.S. expansion because of its access to top talent, robust existing infrastructure and long history as a manufacturing powerhouse.

“The scope and pace of Intel’s expansion in Ohio, however, will depend heavily on funding from the CHIPS Act,” Esfarjani added.

The Creating Helpful Incentives to Produce Semiconductors for America (CHIPS) Act, if passed, would incentivize manufacturers to make new investments in the U.S.

As currently proposed, the act would earmark $52 billion in federal investments for domestic semiconductor research, design and manufacturing. The Senate passed this legislation in June with a 68-32 vote, but it is stalled in the U.S. House of Representatives. CHIPS was approved in January 2021 as part of the most-recent National Defense Authorization Act, but without funding.

Esfarjani said passage of the CHIPS Act would expedite the additional phases of the project.

Besides the investment to build the facility, there will be an investment in skilled workers as well.

“This job will serve as a tremendous training ground as we continue to utilize our apprenticeship programs and pre-apprenticeship program Building Futures to recruit and train local people to build and maintain this project safely, on time and under budget while reflecting the diversity in our community,” Hager said.

In addition to the work to build the fabs, both DeWine and Gelsigner said they expect additional Intel suppliers to move to the Ohio. Currently, there are 149 Intel suppliers operating in Ohio, and DeWine believes the number could increase by 30 or 40.