Columbus Crew soccer stadium opens on time for the season 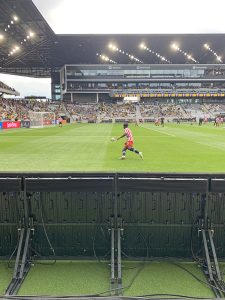 Affiliated members of the Columbus/Central Ohio Building and Construction Trades Council completed work on Lower.com Field in time for the Columbus Crew to host their first game of the season.

Central Ohio’s tradesmen and tradeswomen completed work on the new Columbus Crew soccer stadium just in time for the home team to host their first match on July 3.

The new stadium, named Lower.com Field, was part of an incentive plan to keep the team from moving to Austin, Texas. In 2019, Cleveland Browns owner Jimmy Haslam purchased the Crew, just weeks after the City of Columbus approved plans for a new stadium.

The old stadium, MAPFRE, was located miles away from downtown and its location caused some fans to feel disconnected from the city.

Work on the $313.9 million Lower.com Field created about 500 construction jobs, with the vast majority of those jobs going to the men and women of the unions affiliated with the C/COBCTC.

Despite being slowed by the COVID-19 pandemic, the region’s building trades members got the job done on time.

“It was a testament to the willingness of the building trades members to work aggressive shifts in order to get it done,” said Dorsey Hager, Executive Secretary-Treasurer of the Central Ohio/Columbus Building and Construction Trades Council. “Haslam Sports and Turner Construction did a great job following all COVID-19 related protocols.”

The addition of Lower.com Field, the Arena District adds another attraction for central Ohio sports fans.

The inaugural game at Lower.com Field was a 2-2 draw between the Crew and the New England Revolution, as 20,300 fans packed the stadium.

Hager and Kelly Harrop, C/COBCTC Communications and Outreach Specialist, were both in attendance.

“It was great seeing the intensity of the crowd and walking up Nationwide Boulevard,” Hager said. “Everything was just awesome.”