In mid-December, members of the Columbus/Central Ohio Building Trades volunteered their time as Charity Newsies in order to raise needed funds to provide clothes for children in need. 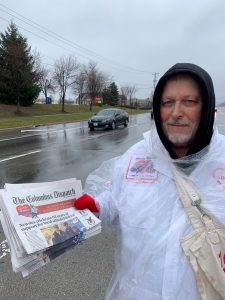 Throughout Franklin County, volunteers, which included C/COBCTC affiliated members, stood on select corners selling special newspapers for any amount people want to give.

The papers, which were donated by The Columbus Dispatch, were special editions created for the Newsies.

The Dec. 14 event marked the 112th consecutive year Charity Newsies were stationed at major intersections to collect donations to provide new clothing to thousands of children, which will help keep them in school.

For C/COBCTC Executive Secretary-Treasurer Dorsey Hager, the event is one of many events his members volunteer for and is a good way for affiliated members to help give back to the community.

“Charity Newsies is incredibly important to support, as our members are always looking to help our community and the less fortunate,” he said.

According to their website, the mission of Charity Newsies is to make sure no child is kept out of school for lack of adequate clothing. 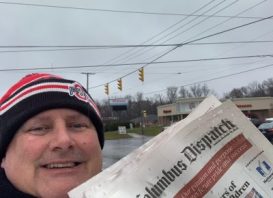 “They provide needy children with school clothes and cold weather clothing like coats, hats and gloves so they can attend school,” said Hager.

In 2018, over $1.7 million was raised by Charity Newsies, with 100 percent of those funds going toward the purchase of new clothing for over 12,000 children in need.

Since its inception, the organziation has helped more than 500,000 children in Central Ohio. They also help clothe children affected by tragedies such as household fires.

More than $24,000 was raised at this annual event, which is one of their major fundraisers throughout the year.