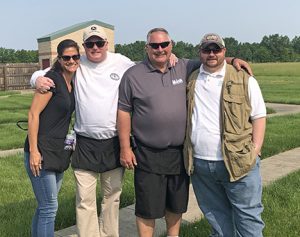 Held on a bright and sunny Saturday in early June, more than 50 individuals attended the event.

The June 8 clay shoot proved to be bigger and better than the prior two events.

This year, the winning team came from IBEW Local 683, while A.J. Poff took home the title of top shooter.

“Thanks to everyone who came out to make the event a success” said Columbus/Central Ohio Building and Construction Trades Council Secretary-Treasurer Dorsey Hager. “We’re helping to raise money to fight a horrible disease.”

The clay shoot raised about $7,800 for diabetes research.

“It’s important that we as community leaders do our part to help fund research to end diabetes,” said Hager.

D.A.D.’s Day was organized in 1987 by the Building and Construction Trades Department, AFL-CIO, with a goal of D.A.D.’s to raise money for the Diabetes Research Institute (DRI) located at the University of Miami, Fla. The DRI’s mission is to find a cure for diabetes, which is when the body cannot produce insulin or cannot produce enough insulin to turn glucose into energy.

Diabetes is a leading cause of blindness, kidney failure, amputations, heart failure and stroke in Americans.

According to its website, the Diabetes Research Institute leads the world in cure-focused diabetes research. It is of the largest and most comprehensive research center dedicated to curing diabetes. Currently, the DRI is aggressively working to develop a biological cure by restoring natural insulin production and normalizing blood sugar levels without imposing other risks.

According to the Centers for Disease Control (CDC) National Diabetes Statistics Report for 2017, roughly 23.1 million Americans have been diagnosed with diabetes. They estimate 30.3 million people, or 9.4 percent of the U.S. population, has diabetes, including 7.2 million, or 23.8 percent of people who have the disease, but have not yet been diagnosed.