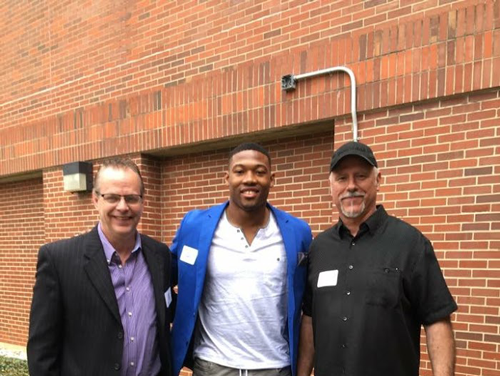 Volunteers from the Columbus/Central Ohio Building Trades gave their time and money to help make a difference in the lives of developmentally disabled individuals by helping renovate the playground at The Ohio State University Nisonger Center.

According to their website, the Nisonger Center is dedicated to improving the lives of persons with disabilities and their families across the lifespan.

On a warm, sunny, summer day, 12 volunteers helped clean-up and replace the rubber mulch at the center’s playground. As part of the new playground initiative, building trades volunteers worked tirelessly to help transform a rundown playground into an amazing play land especially designed for the center’s children. Volunteers also did some basic work such as hooking up the swing set.

Between 5 and 10 volunteers spent an additional five days at Nisonger forming and pouring concrete sidewalks leading into the playground. These dedicated volunteers helped save the center nearly $30,000, which will go toward other important programs.

The tradesmen also raised quite a bit of money at the Autism Speaks fundraiser, which all went toward this project.

This is the third year volunteers have made a positive impact in the lives of those who attend the center.

One of the volunteers was Sheet Metal Workers Local 24 Business Representative Rodney French.

My daughter attended Nisonger when she was younger,” French said. “It means a lot to me personally to volunteer there.