During the Columbus/Central Ohio Building and Construction Trades Council final networking event of the year, building trades leaders discussed the record-setting year in terms of manhours. 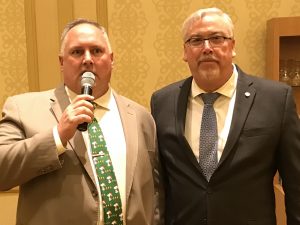 Hager credited the workload to a number of important projects, which broke ground this year, such as the Linden Recreation Center and Columbus Crew Stadium, both of which are being built under Community Benefit Agreements, the Franklin County Forensic Science Center and a Google datacenter. Additionally, there were many small and medium sized projects, which kept affiliated members employed throughout the year.

He also acknowledged important projects from 2018, which wrapped up, including The Ohio State University Covelli Center and Columbus Fire Station No. 35. While it was a small project in terms of hours worked, the first station was the first project built under a Community Benefits Agreement with the City of Columbus.

From a local political standpoint, 2019 was a great year, as ACT Ohio Chief Legal Counsel and IBEW Local 683 member Rob Dorans was appointed to an expiring seat on Columbus City Council. In November, Dorans was elected to a full-term.

“Rob getting elected to council was the political highlight of the year,” said Hager.

In addition to talking about the busy year and politics, Building Trades Council Executive Board members, Managers and District Council leaders, along with signatory contractors, vendors and politicians gathered to discuss various construction-related issues and what they expect in the upcoming year.

The workload for affiliated members is only expected to increase in 2020, with ongoing major datacenter projects, plus a slew of new projects expected to break ground including Phase II work at the Franklin County Correctional Center and the OSU Wexner Medical Center tower.