The Columbus/Central Ohio Building and Construction Trades Council recently held an apprenticeship fair, targeting underserved members of the Linden community, helping to educate men and women about careers in the skilled trades and the benefits associated with these careers. 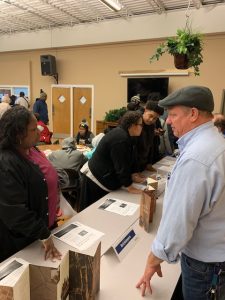 C/COBCTC representatives spoke with underserved members of the Linden Community and telling them about the benefits of a joining a registered building trades apprenticeship program.

Barry Pickett, Labor Liaison to Columbus Mayor Andrew J. Ginther, was at the vent and noted building trades representatives discussed how an apprenticeship can help provide a pathway to the middle class.

“Columbus is America’s Opportunity City,” Pickett said. “The Building Trades continue their outreach in the underserved community to give all residents of Columbus the opportunity to get on the direct path to the middle class.”

Columbus/Central Ohio Building and Construction Trades Council Executive Secretary, Dorsey Hager was appreciative of those who helped to organize and put on the event.

“Erin Beck and the entire Columbus Community Workforce and Apprenticeship Committee did an incredible job of putting on a great community outreach event,” he said. “Special shout out to Elder Larry Price and Pastor Adam Troy for all their efforts driving community engagement.” 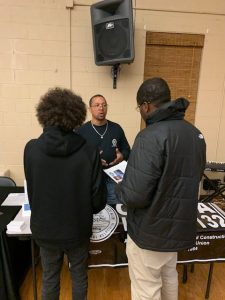 A member of the Cement Masons talks with Linden Community Apprenticeship Fair attendees.

While many Columbus residents have benefited from the current economic boom, Mayor Ginther’s administration continues help provide opportunities for the underserved members of the community, who are not prospering like other residents.

A career in the building and construction trades can open many doors for someone looking to break into an industry where skilled workers are needed to replace the members of the Baby Boomers generation, who are starting to retire.

Men and women who successfully apply to join a registered building trades apprenticeship program will receive a livable wage and health insurance. Apprentices earn full family health insurance, plus retirement benefits such as a pension and/or a 401k.