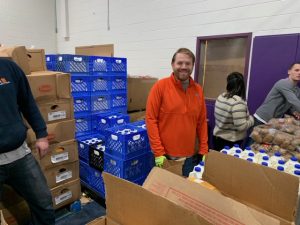 “I think it’s important to remember while the economy is booming here, some people are being left behind, many because of no fault of their own,” said C/COBCTC Executive Secretary-Treasurer Dorsey Hager. “It’s important to get out and give those individuals a “hand up,” especially during the holidays.”

The Christmas Cares-Unions Share program, which marked its 65th year, evolved from the Christmas Basket Program in 1954, to now serve families across central Ohio.

The volunteers provided a number of vital tasks, including sorting food, load shopping carts with boxes of food and fresh produce and delivering the donations to families driving through the St. Stephen’s Community House parking lot.

For members of the building trades who volunteered at the event, it helps remind them how fortunate they are to have a good job.

“The IBEW had many apprentice members volunteer on Saturday,” Hager said. “I think it made many realize how blessed they are to have a job, which pays industry standard wages with great benefits so that they can provide for their families.” 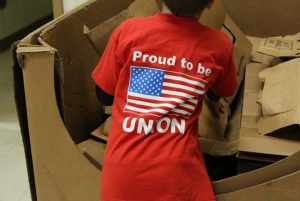 Some union members brought their children to volunteer as well.

Originally founded in 1919 as the Barthman Ave. Community House, the organization’s mission was to operate a neighborhood center on the southside to help eastern European immigrants build community, share the gospel and support workers in Steelton.

Over the years, the location of the organization and the name has changed.

Today, St. Stephen’s Community House, which is located on 17th Avenue, is a hub for advancing self-sufficiency in the community. They are committed to assisting residents in the Greater Linden area to build community, self-sufficiency and individual well-being.

The Christmas Cares-Unions Share Food Drive program is one of the more popular programs at St. Stephen’s Community House. Originally, the food drive was supposed to last three days, but due to an overwhelming response, the food was distributed in just two days.

For Hager, it shows there remains a need in the community to lift people into the middle class and his members gladly give back to this underserved community.

“I think it’s an event that many or our members look forward to participating in every year,” Hager added. “It’s a holiday tradition now.”